According to 2020 estimates, the population of Uganda is around 45.74 million, up significantly from 2013’s estimate of 33,640,833. However, one should remain mindful that Uganda in these estimates takes notes of all mortality accounts that it experiences due to AIDS. As a result, these accounts can possibly affect all subsequent statistics such as infant mortality, life expectancy, higher death rates, and lower population growth rates, not to mention the changes in the distribution of the population by sex and age that would not be expected otherwise. Uganda is the 31st largest country in the world.

The total area that Uganda claims within their boundaries comes to 241,038 square kilometers. The density of the population overall is approximately 183 individuals per square kilometer.

While 84% of residents live in rural areas instead of the developing urban areas, the major cities still boast a large number of inhabitants. Consider Kampala with 1,353,189 residents and Gulu with 146,858.

With over 80% of Ugandan citizens living in rural areas, there isn't much as far as large cities. The largest, by far is the capital, Kampala with a population of 1,659,600 with the next largest city having a population of 365,000.

Uganda is one of the countries that houses rich ethnic diversity, which includes most of its population speaking three major languages - Bantu, Nilotic and Central Sudanic. Furthermore, the number of ethnic groups present in Uganda is very large, making it one of the most ethnically diverse countries in the region. The main ethnic group is called the Ganda, which makes up 16.9% of the population, followed by the Nkole, Soga and Kiga tribes, which make up 9.5%, 8.4% and 6.9% respectively. There are many other tribes; however, they constitute a very small percentage of the total population.

The life expectancy in the country is around 58.5 years, with the life expectancy of males being 56.7 years and 60.5 years for females. Due to the high marriage rate in the country, the age structure is skewed towards the younger generations with 48.47% of the Ugandaís population being in the 0-14 year-old age group. After that, 28.34% of the population of Uganda is in the 25-64 year age group. Lastly, 21.16% of the total population is dominated by the 15-24 year age group. Just 2.04% of the population is 65 or older.

These statistics show that Uganda can boast about a large population that can be classified as a work force, which could in turn help in its growth and economic stability. However, with a huge percentage of the population that is so young (0-14 years old), it could prove to be a grave situation for the country because it has to provide for these children and make sure that it can control its high birth rate. The Total Fertility Rate (TFR), which is described as the number of children per woman, of Uganda is one of the highest in the region and has remained on average around 6.9 in the past decade. As of 2016, the fertility rate for the country is 6.

The rich ethnic, cultural and religious diversity sets Uganda apart. As it is a developing nation, it does house significant working class age groups that can help in its economic growth. Nevertheless, it is imperative that it provides suitable opportunities for its residents. Most importantly, as its sex ratio is roughly 1:1 with males housing a very slender majority, it can become a country that relies strongly on its women in all aspects of life. This, in turn, can help its image to flourish, while giving it another avenue for growth. The country’s women can partake in any responsibilities that are required in any development sector in Uganda.

The population of Uganda has grown significantly over the past century, maintaining a growth rate slightly above or below 3% for most of that time.

The current rate of growth is 3.26% annually giving rise to an increase of nearly 1.5 million each year.

How Many People Live in Uganda? 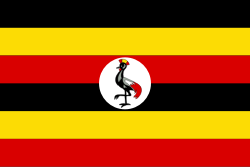