Belgium is located in Western Europe where it borders France, Germany, Luxembourg and the Netherlands. Belgium is home to the European Union headquarters as well as NATO. The February 2015 census in Belgium found an official population of 11.239 million. The estimated population in 2020 is 11.59 million.

Belgium is a country found in north western Europe along The North Sea, between the Netherlands and France with a surface area of 11,849 square miles (30,688 square kilometers). Belgium moderately populated for its size. Using the 2019 population of 11.56 million people, the calculated population density of Belgium is 975.6 people per square mile (376.7 people per square kilometer), which ranks 22nd in the world.

Most of the Belgium population are congested in the larger cities such as the capital, Brussels, as well as other major cities such as Liege, Ghent, and Oostende. These cities are the centers of economic activity for the country and thus provide plenty of employment opportunities to many people. Brussels has a population of 1.175 million with 7,025 people per square kilometer.

Belgium is a population that boasts diverse cultures and ethnicities. However, even with the burgeoning immigrant population, the majority of French-speaking individuals live in and around the capital city of Brussels, while the Flemish-speaking population is more restricted towards the Flanders side of the country. Due to job opportunities, the immigrant population mostly settles down in the large cities, where they can earn their living in an easier manner than in the suburban areas of the country.

In terms of ethnicity, the Flemish community is a majority in the country. More than 6 million inhabitants of Belgium are Flemish, while the French-speaking Walloon are a minority but make up the next biggest population group with around 3.5 million inhabitants. Apart from the two major population groups, there are small groups of minorities present in small pockets around the country, including the roughly 1 million German-speaking residents who live near the Belgian-German border.

Overall, Belgium represents a rich group of inhabitants who belong to different ethnicities. It is a country that is showing steady growth and can provide support for its growing population numbers. The official languages include Dutch, French, and German.

In terms of religious followings, the Belgium population is relatively diverse, with 50% reporting an affiliation with Roman Catholics, Protestant and other Christian at 2.5%, Muslim with 5%, Jewish at 0.4%, Buddhist 0.3%, atheist 9.2%, and no preference with 32.6% of the population.

Belgium became an independent nation in 1830 after parting ways politically with the Netherlands. Belgium has long been known for its neutrality policy but abandoned this for a time during World Wars I and II when they were invaded by Germany. The growth rate has remained pretty close to half of a percent annually, fairly consistently until the present day.

Source: By Jean-Pol GRANDMONT [GFDL (http://www.gnu.org/copyleft/fdl.html) or CC BY 3.0 (https://creativecommons.org/licenses/by/3.0)], from Wikimedia Commons

How Many People Live in Belgium? 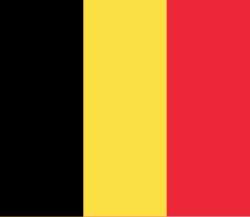