Most of Brazil is sparsely populated with a population density of 24.66 people per square kilometer (62 per square mile), which ranks 6th in the world. The largest city is Sao Paulo with more than 11.9 million residents and a metropolitan population of 21.1 million. The capital, Brasilia, has a population of 2.8 million.

Rio de Janeiro, perhaps the most famous city in Brazil, is the country’s second city when it comes to population. Slightly over half the size of Sao Paulo, it has a population of 6,355,949. Between 1793 and 1960, Rio was the capital city of Brazil.

The current capital city, Brasilia, is one of the newest capital cities in the world; its construction was masterminded by the Brazilian Government and the majority of the city was constructed between 1956 and 1960. Despite being such a new city, its growth has been staggering, and today the population of Brasilia is 2.8 million, making it the fourth largest city in Brazil.

Brazil’s census addresses ethnicity and race by categorizing people mainly by skin color. It asks people to place themselves into one of a number of categories, some of which would seem unusual to an American or European. As well as ‘indigenous’ (the smallest category), Brazilians are asked to report whether they believe they are white, black, brown or yellow.

The main religion in Brazil is Christianity, and around 90% of the population is either Catholic (65%) or Protestant (22%). In fact, Brazil has the world’s largest Catholic population of 123 million people.

The primary and official language of Brazil is Portuguese.

Life expectancy has also grown in Brazil to 71.6 years for men and 78.8 years for women. It's estimated both men and women will live longer than 80 years on average by 2041, which means Brazil will also be dealing with an aging population before long, with greater demands on pensions and health care. The current median age in Brazil is approximately 32 years of age.

Interestingly, Brazil is believed to have the biggest population of uncontacted peoples on earth, and the National Indian Foundation reported 67 uncontacted tribes in the country in 2007, up from 40 just two years prior. It's estimated that about 900,000 Indians across 240 tribes live in Brazil, compared to 5 million when Europeans arrived on the continent.

Throughout Brazil’s history, population growth has been rapid and Brazil is a country of young people. Today, 62% of Brazilians are aged 29 or under.

According to the latest census, undertaken in 2010, the population of Brazil was 190.7 million, although this number has grown significantly in the last six years.

The Instituto Brasileiro de Geografia e Estatística (IBGE), which runs the Brazilian census and compiles the latest population data, completed its latest estimate in August 2015, and reported that it believed Brazil had a population of 204.5 million people between 2014 and 2015. 2013 was the first time Brazil topped 200 million, and it continues rising faster than previous estimates as its ever-growing middle class live longer than their parents. The national statistics agency shows the population should peak at 228.4 million in 2042, which is slightly different from the United Nations projections.

The country's growth is in many ways hampered by the large number of Brazilian women entering the workforce and choosing to wait longer to have children. The birth rate in Brazil has dropped a great deal since the 1970s, when women had an average of over 4 children. Today, the birth rate is 1.77 births per woman, which is lower than the U.S. rate. It's estimated this rate will fall to 1.5 by 2034 and remain at that level through 2060. For now, Brazil has an estimated 2020 population of 212.56 million, up from less than 200 million just six years prior.

The trend of the decreasing growth rate is expected to continue for the foreseeable future. By 2020, it is predicted the number of citizens will creep close to 214 million. The population will continue to grow more and more slowly, until around 2050, when it is expected to stagnate and eventually start decreasing.

How Many People Live in Brazil? 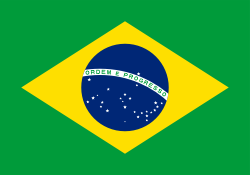 Population growth in Brazil is slowing as the country urbanizes and increases its wealth (it is now the sixth largest economy in the world). Brazil’s growth rate between 2005 and 2010, as reported by the United Nations, was 1.26%. This makes Brazil the 107th fastest growing country in the world, which means it is now growing only slightly faster than the world average.