Tanzania, officially the United Republic of Tanzania, is a relatively large country in East Africa that shares its borders with many countries, including Kenya, Uganda, Rwanda, Zambia, Malawi, Mozambique, Burundi and the Democratic Republic of the Congo. The name Tanzania itself derives from the country's two states, Zanzibar and Tanganyika. Zanzibar is an archipelago off the coast of Tanzania and a semi-autonomous part of the country. Of this total population, 1.3 million reside on the islands of Zanzibar.

The last official census recording the population of Tanzania occurred in 2012 and showed there were 44,928,923 people living in the country.

With 947,300 square kilometers of land, Tanzania is the 23rd largest country in the world and the 13th largest in Africa. This, in combination with the total population, equates to a population density of approximately 62 people per square kilometer. The population is now estimated at over 59.73 million, as Tanzania has one of the highest birth rates in the world and more than 44% of the population is under the age of 15. The total fertility rate is 5.01 children born per woman, which is the 17th highest of any country.

The largest city in Tanzania is Dar es Salaam with 2,698,652 in its population.

Tanzania is a country made up more of a large number of decently sized towns than a few large cities, with over 200 cities that have populations between 10,000 and 100,000. That said, the nation does have one densely populated city- Dar es Salaam - which has a population of 4.365 million. The capitol of the country, Dodoma has a population of 180,541.

The Sukuma is the largest ethnic group in the country and represents around 16% of Tanzania's total population. The vast majority of citizens, including many of the Sukuma, Hehe and Nyakyusa peoples, speak Bantu. There are groups of Nilotic and nomadic Maasai and Luo populations in the country as well, along with two small groups who speak languages in the Khoisan family specific to the Khoikhoi and Bushman people.

When evaluating the quality of life in a country, numerous statistics can give an insightful glimpse into the daily life of any population. The World Factbook has provided numerous points mentioned here that will give a clear view of the problems that the Tanzanian population currently faces. Malaria and HIV are primary causes of death for children and adults respectively in Tanzania. The HIV prevalence rate here is at 4.5% - the 13th highest in the world.

While much of the population comes from the mainland, there is one group known as the Shirazis who trace their origins to Zanzibar's early Persian settlers. About 1% of the population on the mainland and Zanzibar are non-Africans. The Asian community in Tanzania, which includes the Sunni Muslims, Parsis, Goans and others, has dropped by nearly 50% in the last ten years to just 50,000 on the mainland and 4,000 on Zanzibar. It's estimated that about 90,000 Arabs and Europeans also reside in the country.

While each ethnic group has its own language, Tanzania's official language is Kiswahili, which is an Arabic-influenced Bantu language, as well as English.

Although the land of Tanzania has been inhabited for hundreds of years, it hasn't been known as the nation it is today until it gained its independence from England in 1964. Prior to this, the land has come under many different names and it is difficult to track its historical population trends.

Tanzania has been growing at extremely high rates for a few decades now, and it shows no signs of stopping with current growth rates in excess of 3%.

The substantial growth that Tanzania has seen over the past couple of centuries is expected to continue into the foreseeable future with annual growth rates around 3%, which is only predicted to decrease slightly. By 2020, it is forecasted that the population will be 62,774,619, which should grow to exceed 100,000,000 by 2038.

How Many People Live in Tanzania? 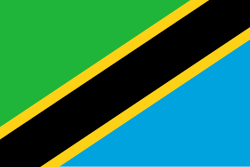 Tanzania's population growth rate continues to climb with a current growth rate of 3.0% annually. The low median age of Tanzania is attributed to a generalized HIV epidemic in the country. It's estimated that there are over 1.6 million Tanzanians currently living with HIV/AIDS, and the epidemic has resulted in an estimated 1.3 million orphans. The overall HIV rate in Tanzania is 5.1%, although this reaches as high as 15.4% among women in some areas. This epidemic may result in lower life expectancy, a higher infant mortality rate, higher death rate, changes in age and sex distribution in the population as well as a lower population growth.

Despite the epidemic, along with high maternal and infant mortality rates, the population of Tanzania continues to grow rapidly. This is attributed to the very high birth rate of 37.25 births per 1,000 people, with a total fertility rate of over 5 children born per woman. Tanzania has the 18th highest population growth rate and birth rate with no signs of changing.

If trends continue, it's projected that Tanzania will have a population of 95.5 million by 2050.