India's 2020 population is estimated at 1.38 billion based on the most recent UN data. India, located in South Asia, is bordered by the Bay of Bengal, the Arabian Sea, and the Indian Ocean, and is also bordered by the countries of Pakistan, Bhutan, China, Nepal, Myanmar (formerly Burma), and Bangladesh. India is the world's 7th largest country by area and the 2nd most populous country with more than 1.3 billion residents.

1 of every 6 people on the planet live in India, and between the 2001 and 2011 censuses, the country grew by 17.7%, adding 181.5 million people. The country has doubled in size in just 40 years, and is expected to unseat China as the world's most populated country in the next couple of decades. India's current yearly growth rate is 0.99%.

Mumbai (formerly Bombay) had an official population of 12,478,447 in 2011, although its wider metropolitan area is much larger - home to 18,414,288 people. It has more than doubled in size in the past forty years, although growth has slowed dramatically in the past decade. During the 1971 census, its population was recorded as 5.9 million.

Delhi, India's second most populous city was home to 11,034,555 people according to 2011 data, and its metro area contains 21,753,486 people. Growth in Delhi is even more rapid than Mumbai's, and it is likely that it will overtake Mumbai to become the largest city in India within a decade. The city has struggled to keep up with growth. Nearly half of its residents live in slums, and the city's poverty rate is four times the national average. Contained within Delhi's boundaries is the city of New Delhi, an enclave city which is the official capital city of India. It has a population of 249,998 people.

There are 29 states in India. Their populations range massively in size – the largest, Uttar Pradesh, holds almost 200 million people, the smallest, Sikkim, just over half a million.

India's largest state is Uttar Pradesh which, with a population of 199,581,520 in 2011, is larger than most countries in the world. If it were a country in its own right, it would be the fifth largest in the world, falling just behind China, India, the United States and Indonesia.

Data on ethnicity is not collected by the Indian census, although the CIA World Factbook estimates the population is 72% Indo-Aryan, 25% Dravidian, and 3% Mongoloid and other.

Hinduism is the most common religion in India, accounting for about 80% of the population. Islam is the second-largest religion at 13% of the population. Other major religious groups in India are Christians (2.3%), Sikhs (1.9%), Buddhists (0.8%) and Jains (0.4%). People who claimed no religion are officially recorded under 'other' by the census. In 2011, 0.9% of Indians selected the 'No Religion' category.

While the number of Indians living in urban areas has increased over the last two decades, about 67% of people still live in rural areas. In 2011, India had a literacy rate of 74%: 82% for men and 65% for women. The literacy rate varies wildly by state. Bihar is the least literate with a rate of 63.82%.

The population of India uses numerous languages to converse across the county. These languages include English, Hindi, and Tamil along with many additional tongues and dialects; however, the former two languages (English and Hindi) are the official languages of the Indian Government. Additionally, 44% of the population uses Hindi as their mother tongue.

The first comprehensive nationwide census was carried out under the auspices of Lord Ripon, the British Viceroy of India at the time, and counted a population of 288 million in 1881. Since then, a census has been held every ten years in India.

The 2011 census was the second largest the world has ever seen - second only to China's census the previous year. It took place in two phases. The first phase, in April 2010, counted all of the buildings in India, and the second phase collected data about the people of India.

The census was a massive exercise, employing millions of Indians. The total cost of the census came to $439 million which was actually considerably cheaper per person than most censuses held around the world. The average census costs over $4 per person, whereas the census in India cost just $.50 per person.

The 2011 census was the fifteenth nationwide census carried out in India. The first was held in 1881, although it was not able to cover all of the British-held Indian territory.

India's population continues to grow fairly steadily as the years progress. Most notably, the population is growing faster than China's. India is expected to surpass China as the world's most populous country around 2024, but like China, the growth is expected to stagnate and eventually decrease in the latter half of the 21st century.

How Many People Live in India? 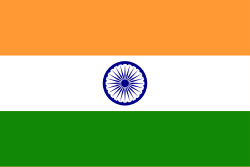 While India's population growth has slowed remarkably over the last few years, it's still growing faster than China and is expected to surpass China in population by 2028, when both will have about 1.55 billion people.